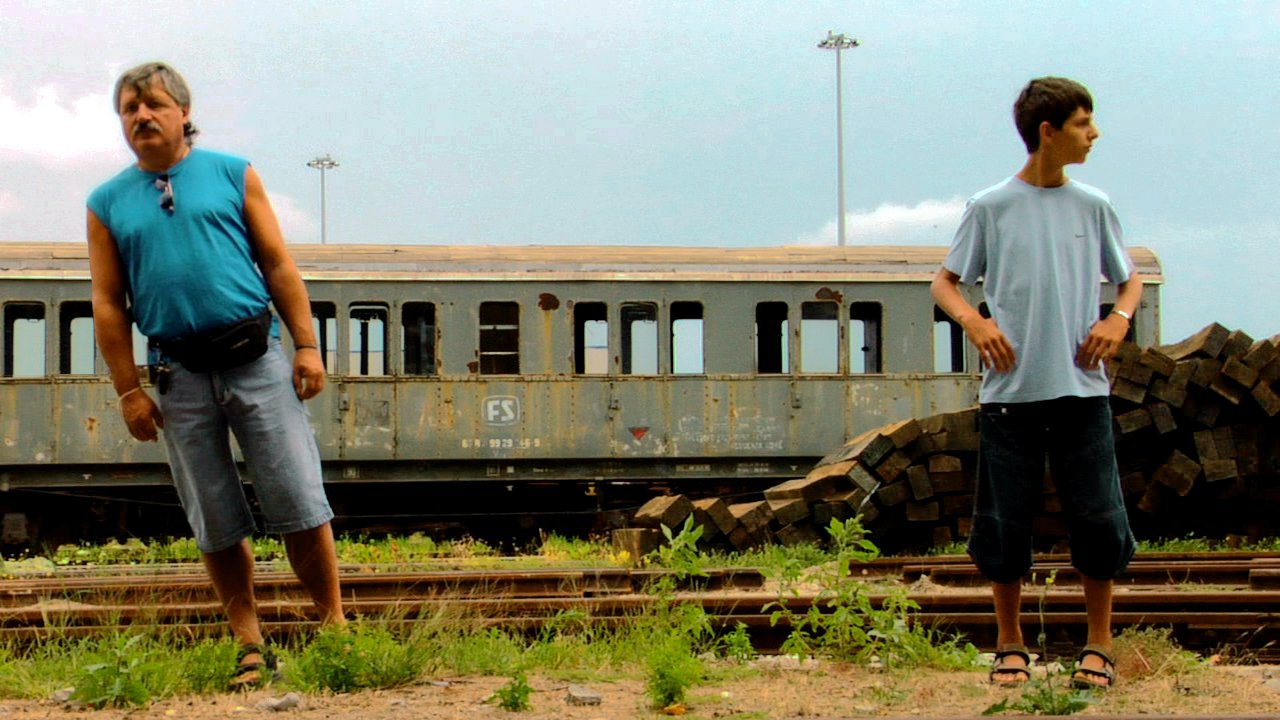 Strange that I always say dad, but when we carry heavy things together, it becomes Johan instead.

Newton’s first law: An object will stay at rest or continue at a constant velocity unless acted upon by an external force.

They stand there next to each other. One leans precariously to the left. He should fall, but stands at an angle, obstinately against the laws of nature. Sometimes they exchange an absent-minded glimpse at each other. They look down at their shoes, up at the sky, still firmly anchored in their common ground. Everything is completely in order. It’s always been this way.

Then you come into the picture. You look the leaning man in the eyes and the world swings around, everything changes and the man suddenly stands upright. The status quo has been disturbed. In their imbalance they were in balance, what’s happening now? They look at each other, inquisitively and scared. The presumptions are no longer valid, they walk simultaneously out of the picture, in their own directions, to something new.

Newton’s third law: Every action has an equal and opposite reaction.

A son becomes a father and has a son. History repeats itself, but we never learn. The experience must be new every time. We are isolated links – and at the same time connected – in a chain of generations.

Near the apartment in Brussels where Geska and Robert temporarily live is an épicerie, a deli on the corner. The owner, Mongkhon, is a slender man seemingly in his 50’s from Thailand. Every now and then his son, the student, helps out behind the counter. Mongkhon is as calm as a lobber. The guests know to only come here when not in a hurry. Sandwiches, pies and salads are prepared in peace and quiet. One sits down, disengages from the surrounding world and leaves full and strong after an hour or two.

The deli soon becomes a favourite place for Geska and Robert. On top of the good food and the peaceful ambiance, it is interesting to observe the interplay between the two generations in the shop. The good-natured, friendly father and the almost-adult, cool and simultaneously embarrassed son. The thought stirs: we make a portrait of them and have the opening here in the épicerie! Mongkhon and his son become interested and flattered by the proposal and accept.

At five o’clock in the afternoon on the 28th of April the little shop is transformed into a gallery and curious guests drop in. The video portrait now hangs high up on the wall behind the counter. Mongkhon walks around with pots with guacamole and shrimp, slices up pies, takes away the dishes and looks up towards the canvas, towards which the projector’s light shows himself and his son. There they stand and exchange glances with each other, look up towards the sky, look out towards the side, look down at their shoes. Geska and Robert sit at one of the café tables and observe the film, Mongkhon and the guests who come and go. Mongkhon speaks proudly with his guests and Geska and Robert hear the buzz: ”Art installation, portrait of him, it is also his son, he is almost 18, if you move your head something happens, don’t know exactly how, but it doesn’t matter, nice, interactive, new technique, lovely colours!”

A couple of men sit at the next table, looking contemplatively at the film where father and son have stood still for a longer time as no one has come forward and ”addressed” them. Robert stands up in front of the counter and leans his head in the same direction as Mongkhon does in the film, and all of a sudden the whole film leans and Mongkhon straightens up. Both men look perplexedly at the screen and at Robert, and one of them says, ”Was that you who did that? How?”

Premiere of the whole series of Father and Son, Verging! The gallery is big, magnificent, and Geska and Robert have filled up every nook with image light. They have discussed among themselves and have concluded that it doesn’t matter if the audience discovers the essential mirror-reflex action with the films or not. The films should be able to stand for themselves, even when only a single one is shown. In other words, no instruction manuals are hung up. Remarkably enough everyone still seems to know that it has something to do with leaning. A few young guys in loud t-shirts stand in front of the film and lean in the wrong direction. But many lean just right and it is fascinating how well the information has been spread. The artists have shown the curator, the organisers and those who worked with rigging the installation how it works. They have in their turn apparently told others who gladly want to put themselves out there, show that ”this, yeah, I know this”. Everyone is proud to show the ace up their sleeve!

Mirror neurons: The brain cells in the frontal lobe and the crown lobe that decode others' movements so that we can imitate them. The mirror neurons don't discriminate whether it is someone else that does the specific movement or if it is myself. In other words, on one level I perceive that it is me that commits the act I watch someone else do.