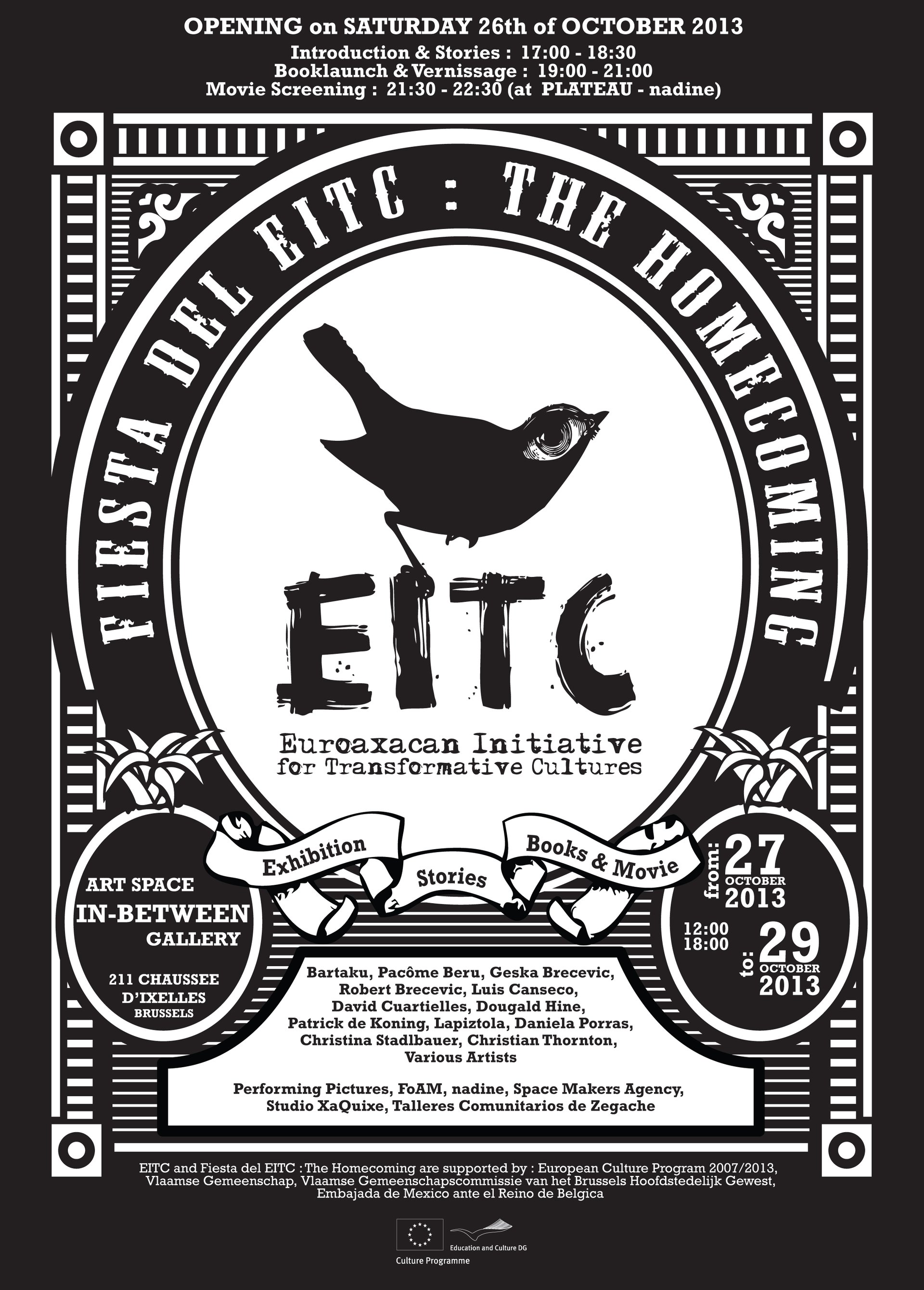 The artists and artisans from Europe and Mexico are closing the cycle of their two year collaborations with an exhibition and public presentations followed by a book launch and movie preview. The two year journey of the EITC project results in a co-created artistic show of diverse works from transformative processes between art, crafts, technology, ancient beliefs, contemporary cultural exchange and visions for alternative futures.

We welcome you to the event in Art Space In Between, Chaussée d'Ixelles 211, Brussels on 26th of October!

The exhibition stays open from Oct 27th to 29th 2013, from 12:00 to 18:00. Two years ago, in Oaxaca, a group of artists and artisans from Europe and Mexico set out on a journey into each other’s worlds. This October, as the cycle of the Euroaxacan Initiative of Transformative Cultures comes to a close, we gather in Brussels to share the fruits of our journeying and to make sense of what we have brought home with us. Our first steps together were taken during the festival of the Dia de los Muertos (Day of the Dead) and the ongoing presence of the past has shaped our collaborations. Following the invitation of the Mexican thinker and activist Gustavo Esteva, we have tried to find our way ‘back from the future’. The heroic rocket-thrust of modernity becomes the cautionary tale of Laika, the space dog, drifting to a lonely death. In its place, we look for other stories whose heroes know that getting far out is the easy part, it’s finding your way home that is the real challenge.

Among the experiences of pilgrimage and economic migration, can we find our own paths home – wherever home might turn out to be – to a place where the exponential projections of industrial time fold back into a more rhythmic sense of temporality? This Homecoming is a chance to gather the fragments and share the memories of the past two years, in the many forms they take. An exhibition of the sculptures and installations made by FoAM, nadine, the Talleres de Zegache and Xaquixe. A launch of The Crossing of Two Lines, the book produced by Dougald Hine and Performing Pictures during the project. A screening of part of Memories of Development, a film centred on a dialogue with Gustavo Esteva. And an evening of stories, ideas and conversations in which the European and Mexican partners reflect on what we have learned together and where it has led us.

Join us for Euroaxaca: The Homecoming on Saturday, 26 October, 16.00 onwards.