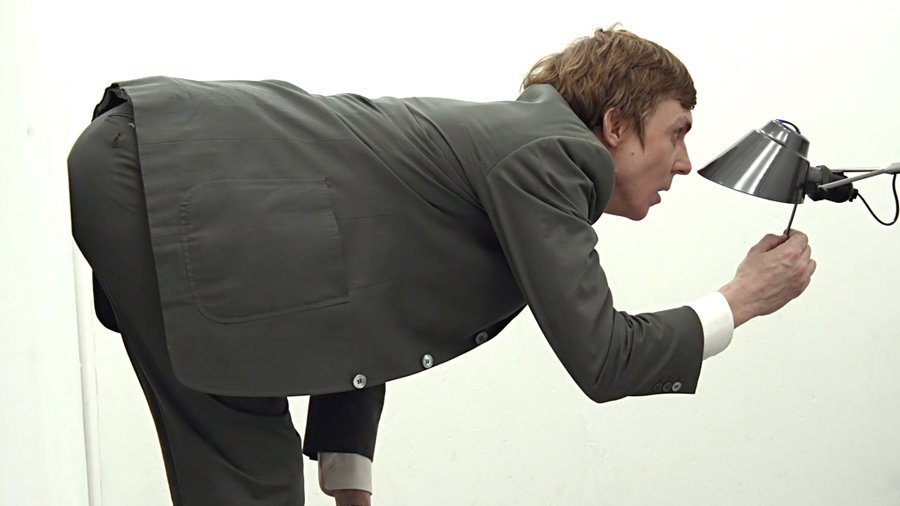 One becomes two; two becomes three. Space and time separates you. And the desire to be like the other, to have what the other person has, is reflected in a carousel. At Hammarby ArtPort, Robert Brečević, Geska Helena Brečević and Anna Koch – two artists and one choreographer – worked with the actor Simon Norrthon to investigate the concept of "the other".

There is Simon – and Simon. Simon previously recorded and Simon three seconds ago.

The public watches the separated individuals’ communication with each other on the screen. After a while Anna gets an idea. She corrals two bold spectators into the office with Simon. They stand there for a little bit, improvise a little, and come out again, excited and happy. A few more dare to go in.

So Simon acts for 25 minutes, sometimes alone, sometimes with guest players from the public. Simon gives thanks and makes an exit.

This possibility to take part in the installation has whet the appetite. Geska, Robert and Anna decide to let the loop with Simon keep rolling during the rest of the evening, and allow the public to come and go in the office at will.

An older man is seen dashing out of the office and hurries up to the projection. He tries to make it in time to see himself inside the office, but fails. A woman goes in and dances around with her bushy hair flailing in the air. On the screen’s right side Simon is seen longingly laying his hands on the wall. A young couple goes in and kisses while a woman in the audience smiles at their heated embrace.

A woman stands in the office and stares at the computer screen. A passing man takes the opportunity to inquire about how she’s doing. A long silence follows. Finally she mumbles, ”I’m going to go to the dentist,” and begins with determination to walk towards the screen. She climbs up on the desk and lies on her back, takes a glance at the strong lamp, points it towards her face and opens her mouth wide. The man walks up and does an inspection. The woman’s friend subsequently asks the man to carry the patient out of the room. The man steps forward and lifts the woman up high and starts to spin her around. The others in the office are forced to duck or press up against the wall to avoid getting her feet in their faces. And in the office next door stands Simon. Alone in his own reality. 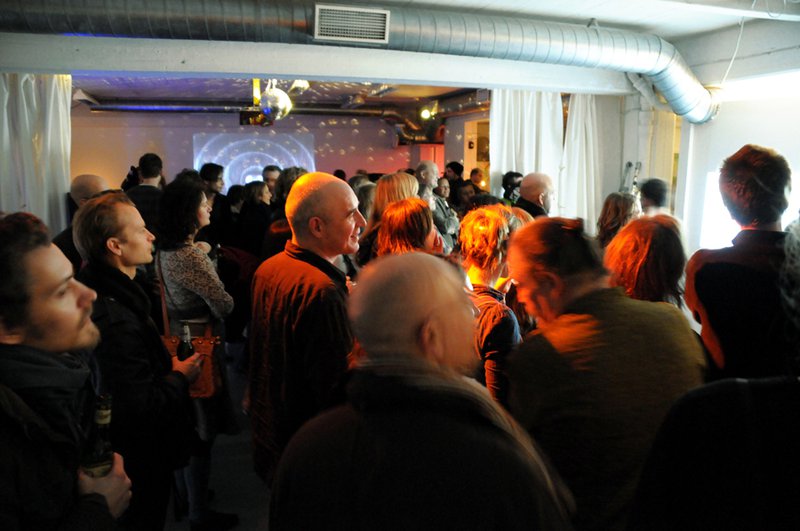 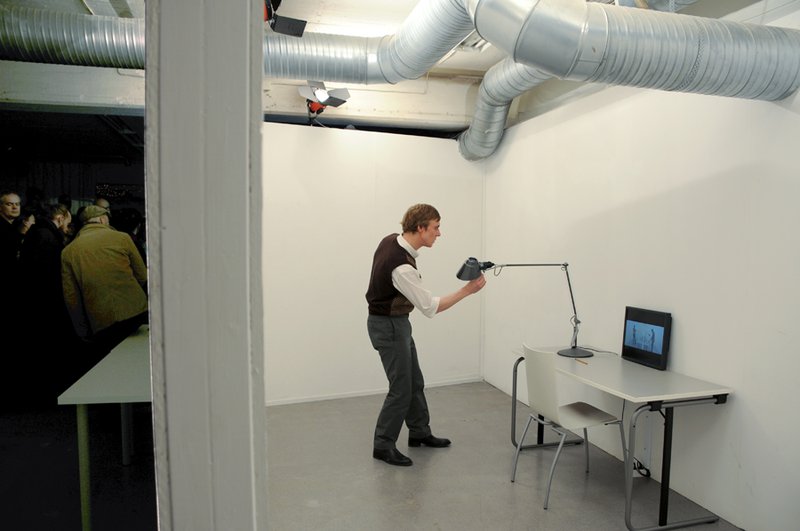 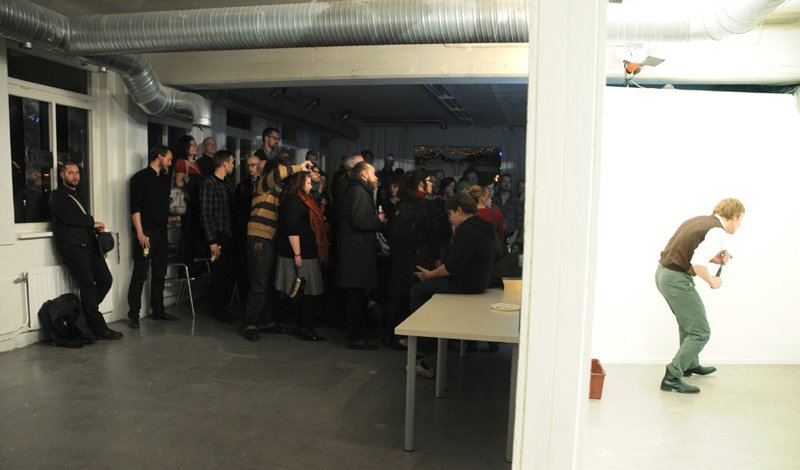 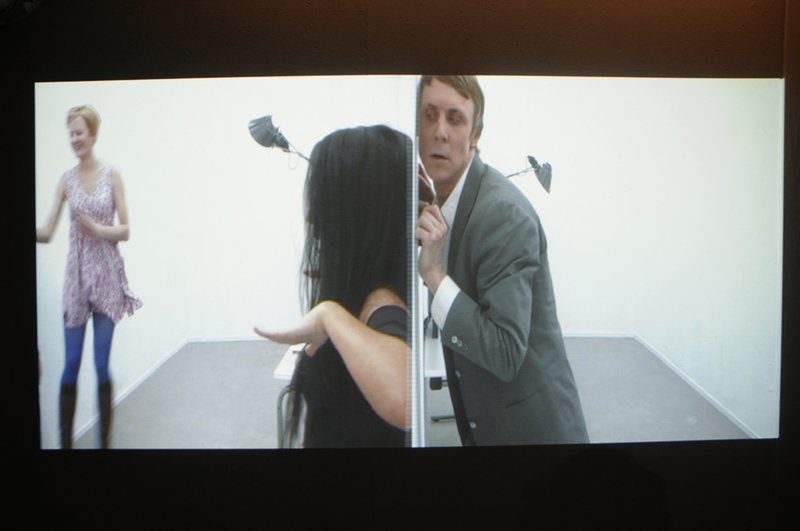 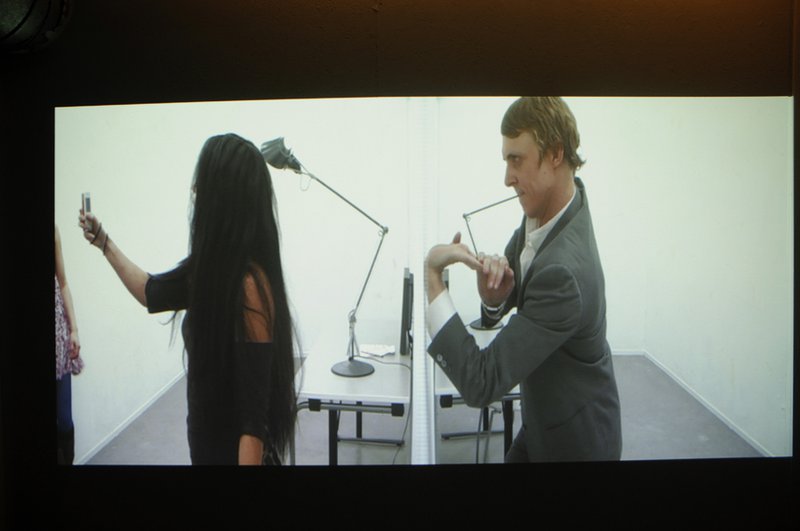 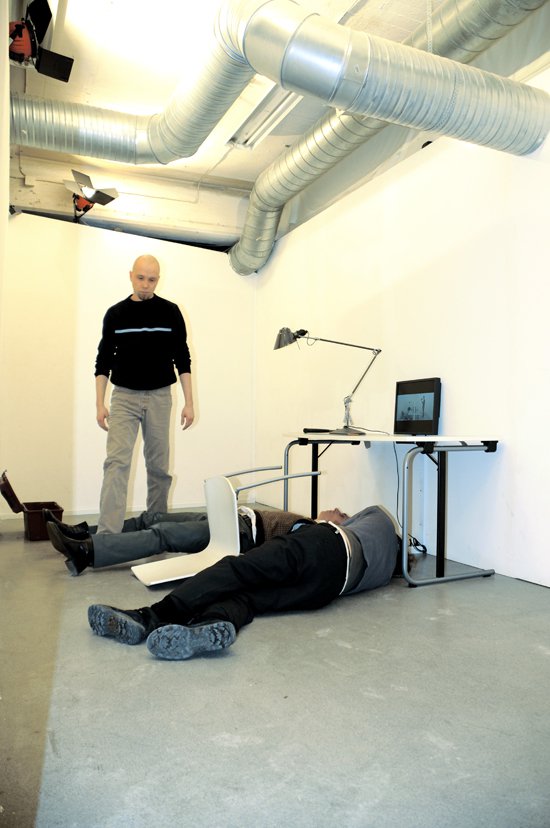 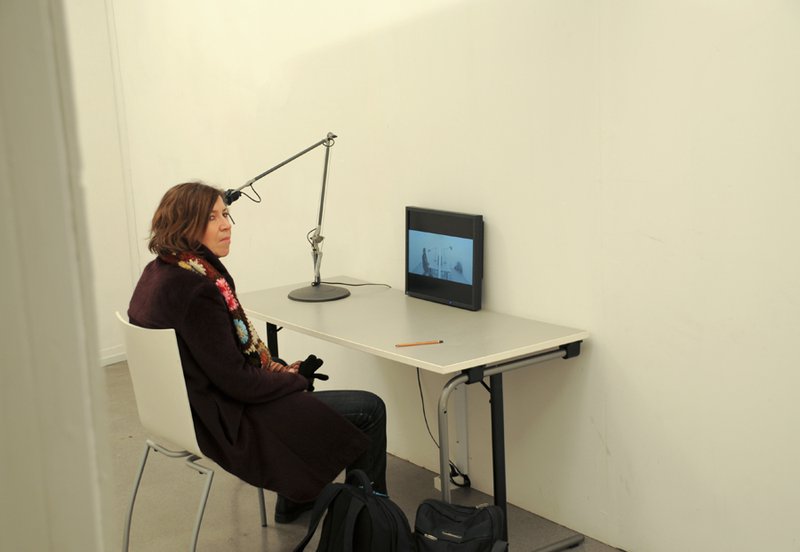 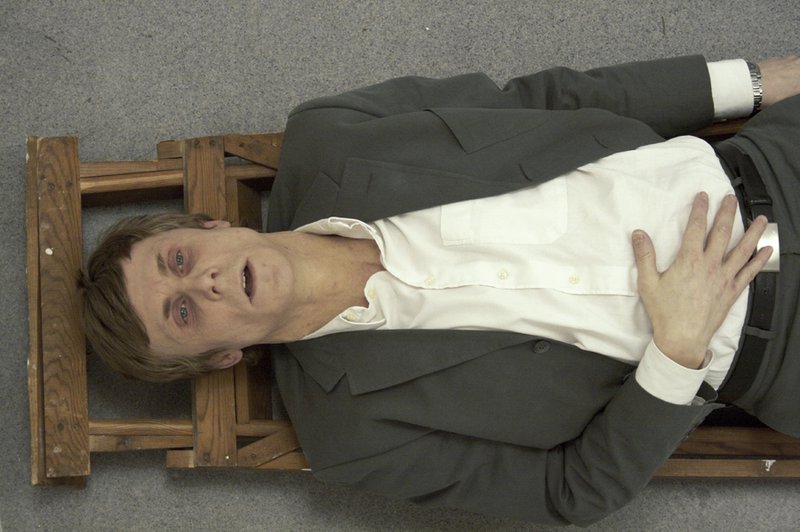 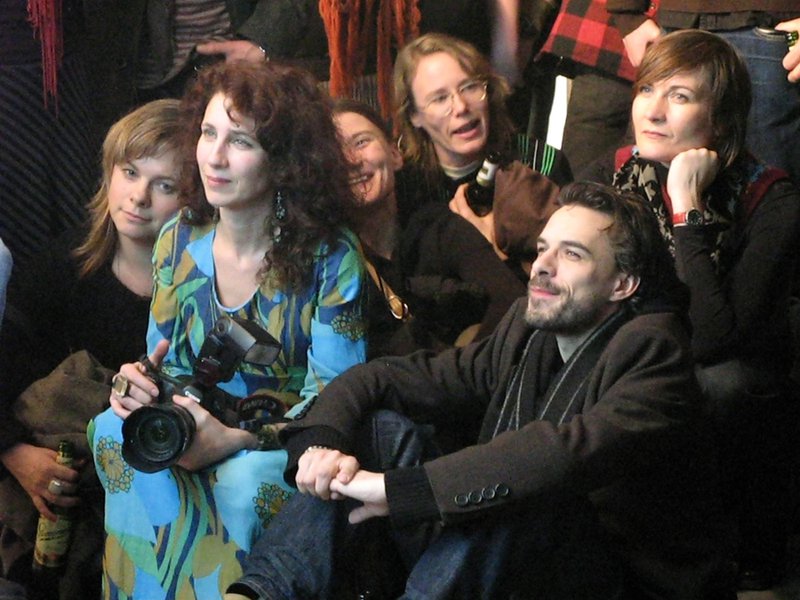 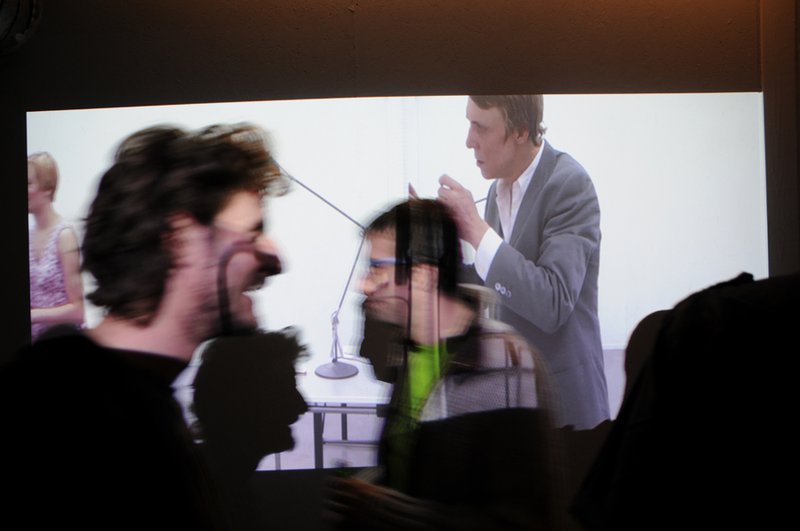 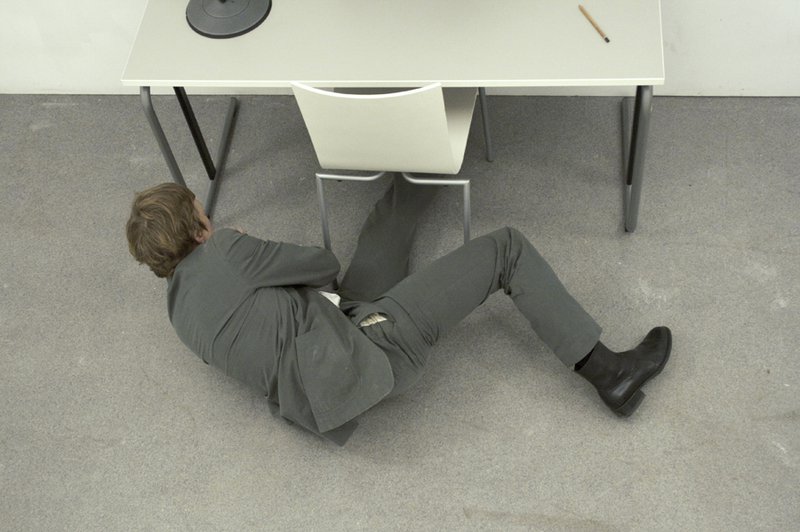 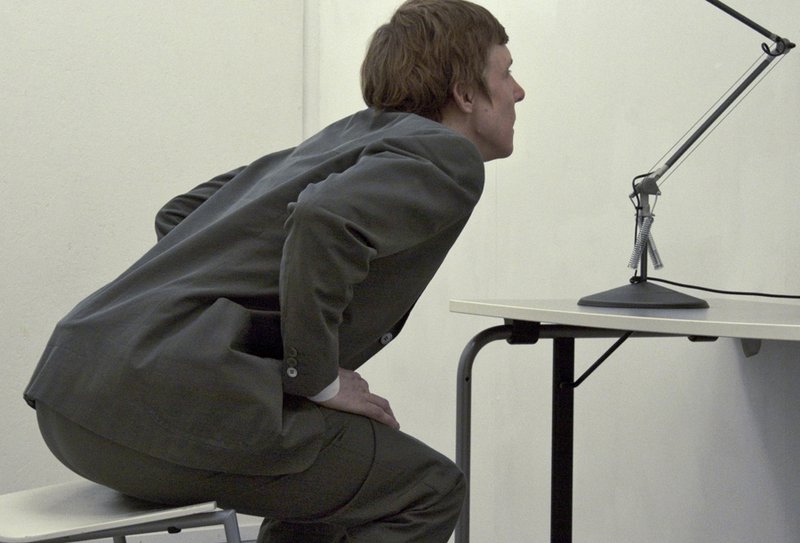 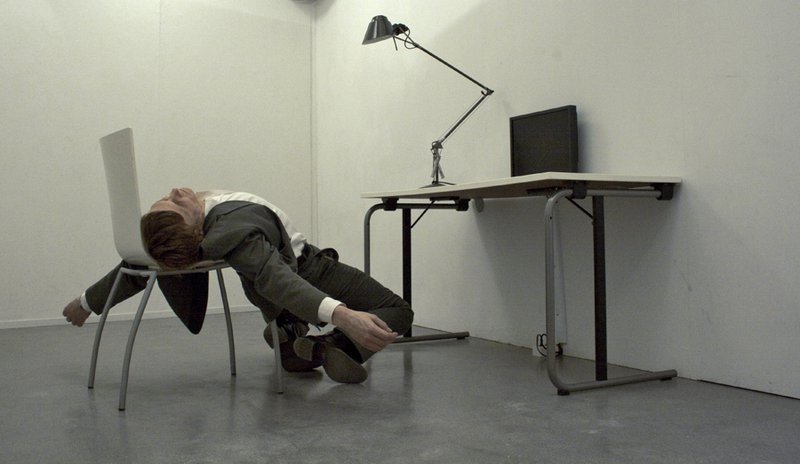 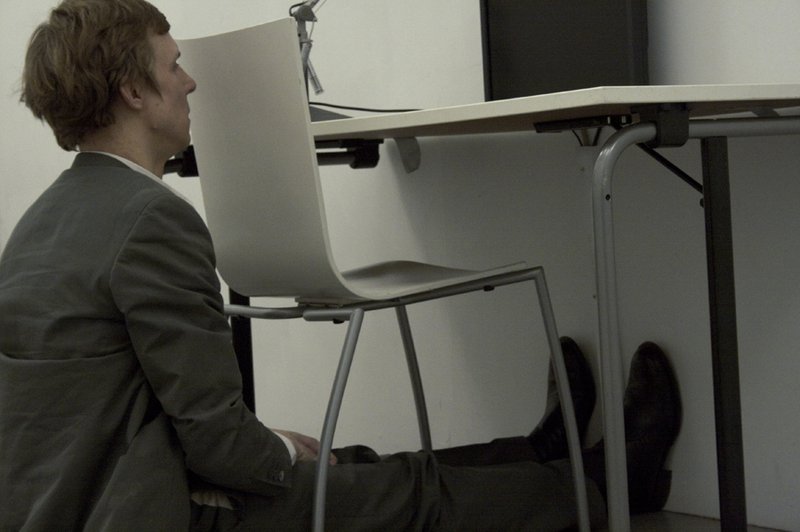 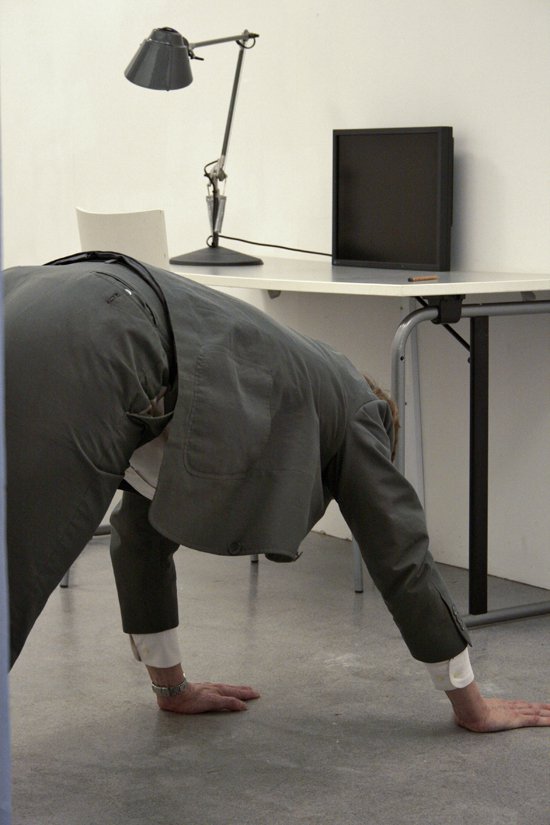 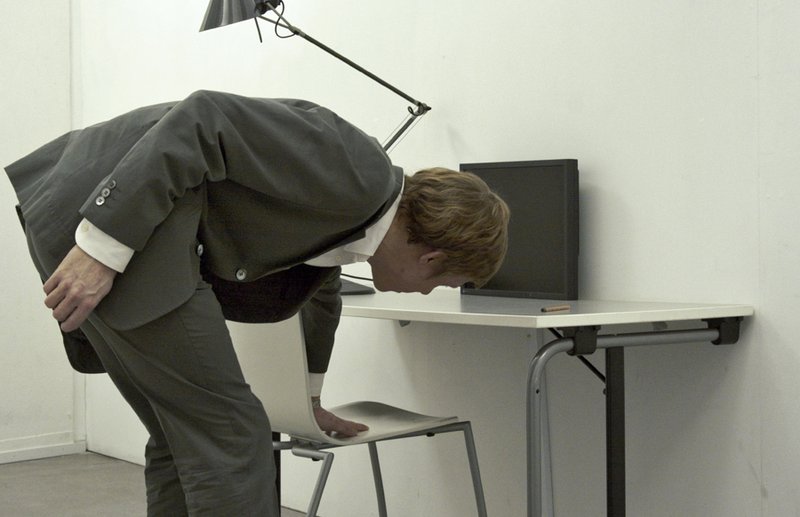