To put it bluntly, I was taking the Madonna out for a spin. As part of "Being Willy Depoortere m/f" - a workshop/installation on pinhole techniques and negativations, arranged by art platform nadine from Brussels – Robert spent some days at PAF in St Erme, making Virgin Mary spin. Here's his story from some intense days...

They expected the Nunnery to be cold this time a year. Old stone walls and hardly any heating. In order to keep myself warm, I decided to perform a series of work intensive experiments. The task required a small statue of Our Lady, a high-precision pinhole camera (model Robert Rigby), 6 4x5 inch casettes, Ilford's photo paper (glossy), a rotating platform and finaly, four 800 watts lamps. I was about to explore the sublime juncture of light and motion intertwined in a elusive choreography shere softness. To put it bluntly, I was taking the Madonna out for a spin.

The first recipe involved: a series of 13 frames, an entire circular motion divided into increments of 28 degrees,  exposures of 130 seconds per picture. I worked directly on photo paper, ridding myself the intermediary step of film to be processed. The result was scanned and assembled into a looped video of two seconds. The rays of light were caressing the slender figure of Our Lady. I wanted the motion to be as tender as the sensual representation of luma. And after a brief intermezzo that involved exterior shooting of a 16 frames rotation following unstable light conditions (clouds and the short span of day and night in late October), I went for the Big One. They all thought I was crazy. A 60 frames pinhole camera animation of a rotating Madonna, could it be done? Each frame rendered an increment of 6 degrees - following an exposure of 80 seconds. I could produce a batch of 16 pictures (since I had 8 double-sided casettes at my disposal) at a time. Cut the paper, load the casettes, take the pictures, develop the pictures, put them to dry and load again - all in all four batches.

Finally 60 pictures were hanging on the string dripping water down the corridor floor. The cumbersome process of scanning was to follow the next day after a good nights sleep. The result... staggering! Both light and motion were pure expositions of soft transition.

So tender and ever so present. Light-as-material as well as motion-as-material incarnated.

The work was conducted as part of Being an Artist - a series of interactive installations of Various Artists where participating artists are invited to become one of the Various Artists. The workshop consisted of a two day atelier in Plateau Brussels and a five day stay (from Wednesday 10 to Sunday, November 14) in PAF, St Erme, France,  with a group of artists, where a reconstruction of the studio will be created by Willy Depoortere.  By means of various workshops (like building a life-sized pinhole camera, the creation of negative objects, etc) the participating artists can identify themselves in the life and work of a different character. 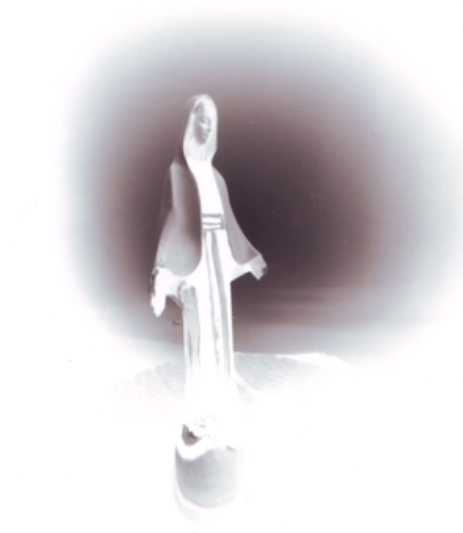