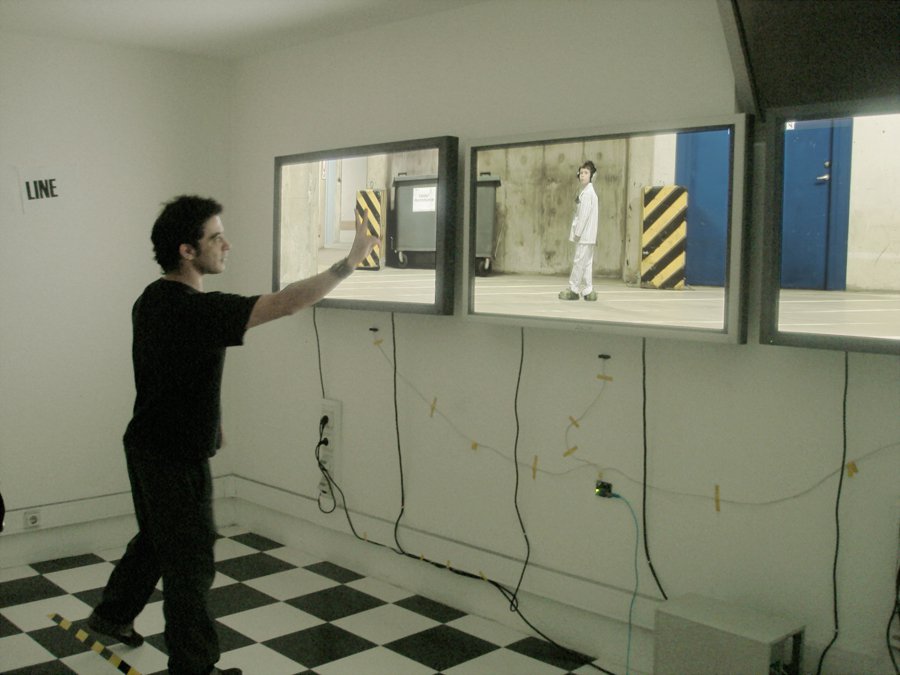 A Family of Performing Pictures

Alkantara festival is the most important international performing arts festival in Portugal. "Al kantara" means "the bridge" in Arabic, underlining the ambition to build bridges: between artists, between cultures, between art forms. The most expansive and festive moment is without a doubt Close Encounters: 16 performances have been selected by a jury and is presented in gardens, palaces, galleries, museums, sports clubs and bars, creating a parcours of unexpected encounters through out the city of Lisbon.

"THEY DON'T LOOK HAPPY" It is the last day of the two-month long festival and now the festive conclusion remains: Close Encounters. Sixteen chosen installations, dance appearances and theatre performances will be presented in gardens, galleries, museums, sports bars and palaces, allowing for unexpected meetings throughout the city during 24 hours. Geska Helena Brečević and Robert Brečević exhibit Men That Fall, Women That Turn and Kids on the Slide in Espaço, a bar and culture centre in the area Anjos in central Lisbon. It is a worn out and socially charged area, right next to the tourist thoroughfare in Bairro Alto. A public gathers here who aren’t really like traditional gallery visitors: adults with eager small children, the bar’s somewhat rugged regulars, faded beauties who spill in from the surrounding streets. Geska and Robert function as hosts and greet the visitors, show them around and introduce them to the various personalities in the installation. ”Why aren’t they smiling?” he asks and points indignantly towards the screen with the woman. ”They don’t look happy.” ”Well,” answers Geska with a gesture towards the next room, ”the men aren’t so happy either.” The three other women in the room start to listen to the conversation and the man turns to them as well. ”I don’t think you understand how it feels for a man when a woman looks at one like that,” he exclaims. ”It’s horrible!” The three women bite back immediately. ”What? Why shouldn’t we understand that?” ”No, but it is terrible. I don’t think you understand.” ”Yes,” says one of the women thoughtfully, ”it’s obvious. It becomes in some way worse when women don’t smile.” She points into the room. ”One can laugh at the men. But really it’s not at all fun. It’s quite tragic.” Her friend continues: ”It is like the theatre. If a woman on the stage hits a man it is comedy, if a man hits a woman it gives a completely different connotation.” (Helena Thunell, excerpt from the book Performing Pictures, KIBELA 2008) The Alkantara Festival, Lisbon, 18 June 2006. It is late evening when three policemen suddenly show up in Espaço. Under the pretext of making sure everything is in order, they also take the opportunity to inspect the artwork. An authoritative constable positions himself in front of a kid on the slide, it is the little girl in a ballet costume who is standing by the indoor pool. When he steps closer the girl turns around and looks at him and forms her arms like before a swan dive and glides away to the next screen. He follows her, with the result that she completely disappears from the image. He puts his hands on his sides and scrutinises all three screens, but the girl is gone. When he walks away she shows up in the image again, only to quickly glide out of the frame to the right. The policeman nods benevolently as if he approves the maneuver. The next child in turn on the screen is the girl in a princess dress with red boxing gloves. The bar owner José is familiar with all the figures and quickly runs up and waves at his favourite on the screen, and becomes totally delighted when the sweet girl does her ”screw you” gesture at him. (Helena Thunell, excerpt from the book Performing Pictures, KIBELA 2008) http://www.alkantarafestival.pt "A Family of Performing Pictures" | Close Encounters III | Alkantara festival, Lisbon/Portugal | 2.6 - 18.6.06 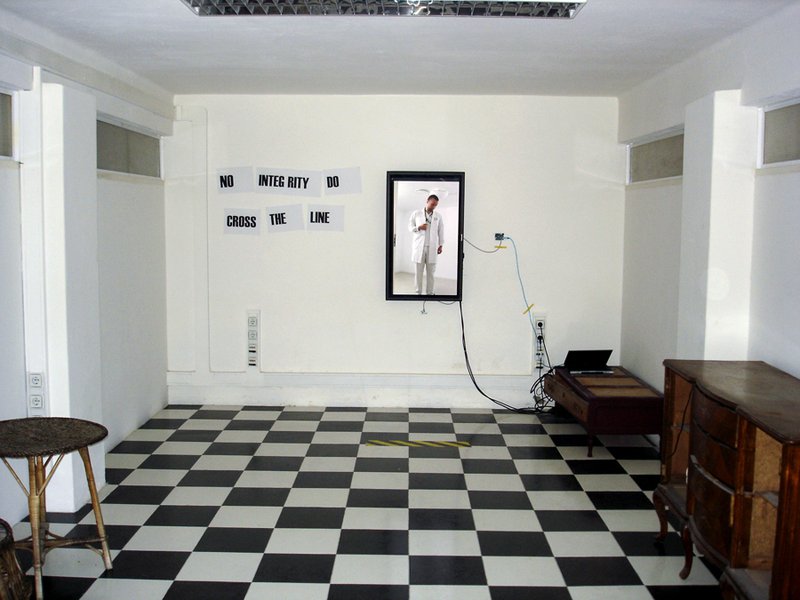 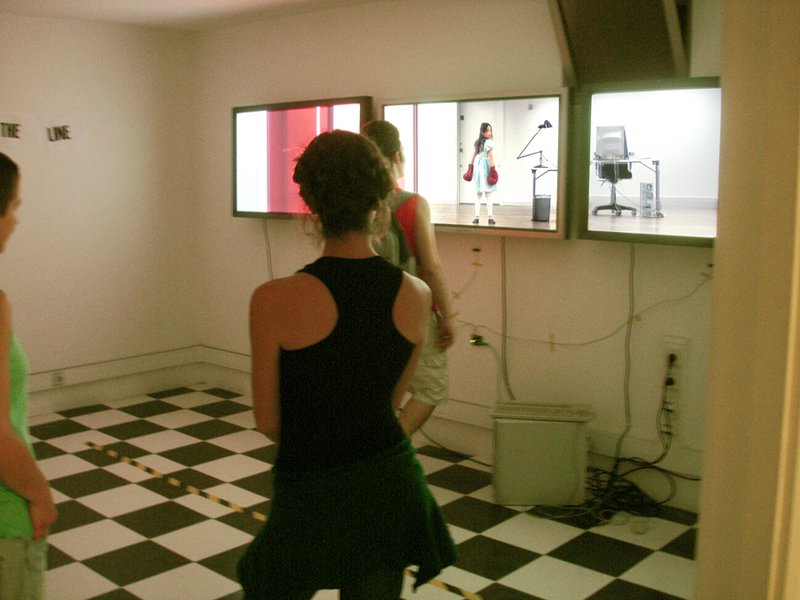 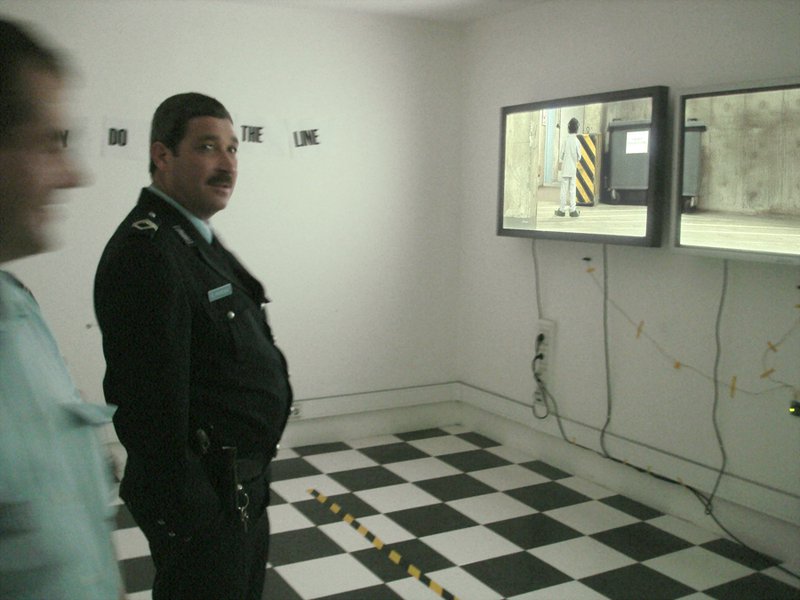 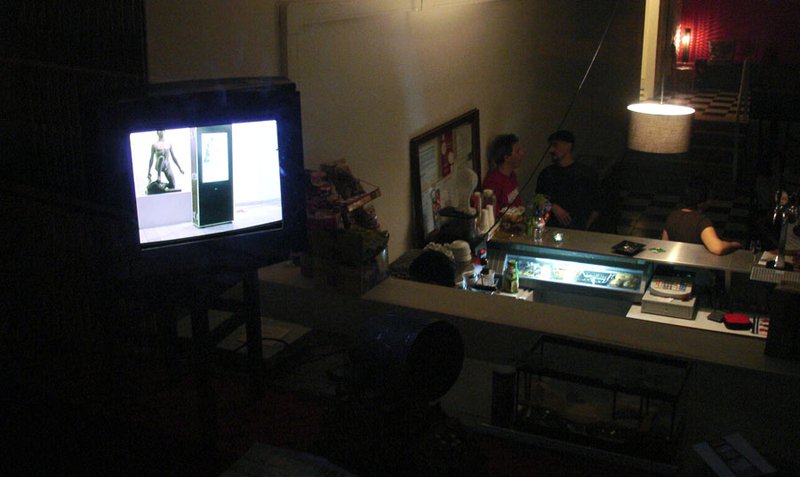